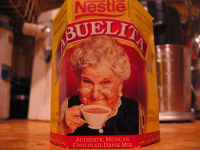 Last fall I made Mexican Hot Chocolate cupcakes for Thanksgiving, and they were much loved. So loved, in fact, I didn’t even get to have one once they were finished- I only got to eat some batter before they were made. But anyway everyone raved about them and my dad ended up eating most of them, not to mention he got very territorial about them. So I’m always looking for ways to top myself, or at least vary a theme thats well-known and loved. So I decided I’d make this recipe this year for Thanksgiving.. and no, you didn’t just wake up from a coma and miss the past 2 months. Its nowhere near Thanksgiving yet. I basically wanted to test it out since it was originally a cake recipe and the frosting was made up in my own head, so I wasn’t 100% sure that it would work very well. And I figured, if I tested it out now, I’d also be able to enter it in Cupcake Hero’s latest challenge. Two birds with one stone- thats what I’m all about, baby.

I love Mexican Hot Chocolate. We used to drink Abuelita (made by Nestlé using artificial cinnamon) and Ibarra (more authentic) all the time ’round here. Its different than regular Swiss Miss, in case you don’t already know that. Its hotter, and spicier, and doesn’t come powdered. It comes in blocks of chocolate you have to break apart and cook on the stove top to melt, with milk. Its absolutely delicious and if you’ve never had it- go do so right now. I command you. Go ahead, I’ll wait.. .. . . . … . . .. . *whistles* .. . .. .. . .

Okay, you back? Good. So anyway like I was saying, I love Mexican Hot Chocolate. I think its a great concept to apply to baking, whether its cookies or cupcakes or cake or frosting. And since I’ve done the cupcake thing, this time its the frosting thing. I also love anything Dia de los Muertos related, so of course I made sugar skull cupcake toppers. And the cinnamon vanilla cake is simply to die for. This recipe was adapted from a wedding cake recipe by Michelle Doll, of Michelle Doll Cakes. I not only made it into cupcakes, but also completely re-did the frosting recipe based on my needs and what I had handy. I made my buttercream without using measurements, so this is the best idea of what I did that I can give you. If you try it and its wrong in some way, please let me know. *I added shortening for a quarter of the amount of butter to stabilize it, but if you don’t have shortening, you can use a smidge cream of tartar to help stabilize it, as the coffee sometimes causes it to separate and get wilty, but when I say smidge I mean smidge… its very acidic tasting so if you go overboard you’ll ruin the flavor of the frosting. Okay so these were pretty awesome. And they look really pretty. ¡Qué linda! I kinda figured they would be awesome. Its just good to test drive a recipe sometimes. I think the frosting came out really spectacular, but then again like I’ve mentioned, I love Mexican hot chocolate and I like hot and spicy stuff. Its very subtle hot though, its not really in your face, so I don’t know if anyone would complain about it. Unless they weren’t familiar with Mexican Hot Chocolate and didn’t understand why there was chili in their buttercream. In which case- you should not be friends with those people, they’re crazy. Go feed ’em to el chupacabra (and while you’re at it, I know a few more people you can throw to the goat sucker… contact me for a complete list). They were a success! Although when I make ’em for turkey day I probably won’t use skulls on top. Heh. You can definitely tell theres cayenne and chili in it, its got a kick after the initial taste. But its not overpowering.